thoughts from a non-theist

Yup, it looks like C L Taylor is trying to do some back peddling, after his vile outpourings of racism, idiocy, and homophobia ended up getting a far wider audience (thanks to a retweet by PZ Myers) than he probably ever thought they would. Hopefully being shown that what’s said in public can reach ears that you don’t want to hear will curb some of Chris’s more lunatic pronouncements.

Let’s look at some of his tweets made after his ‘outing’…. 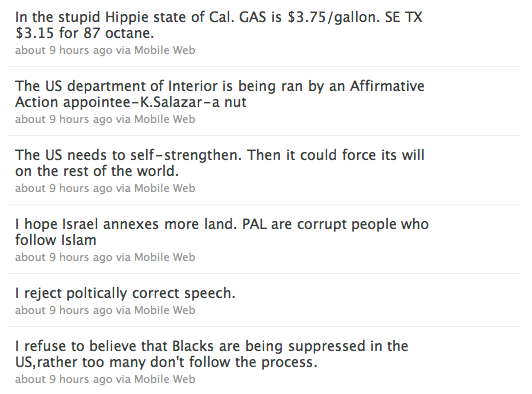 …oh….I see, just as demented as before. If he keeps this up the next step is going to have to be contacting local school boards – I couldn’t in good conscience do nothing if there’s a risk that this hate monger is going to have access to young minds.

Write what you like, but don't cry if you act like a dick and get banned for it Cancel reply